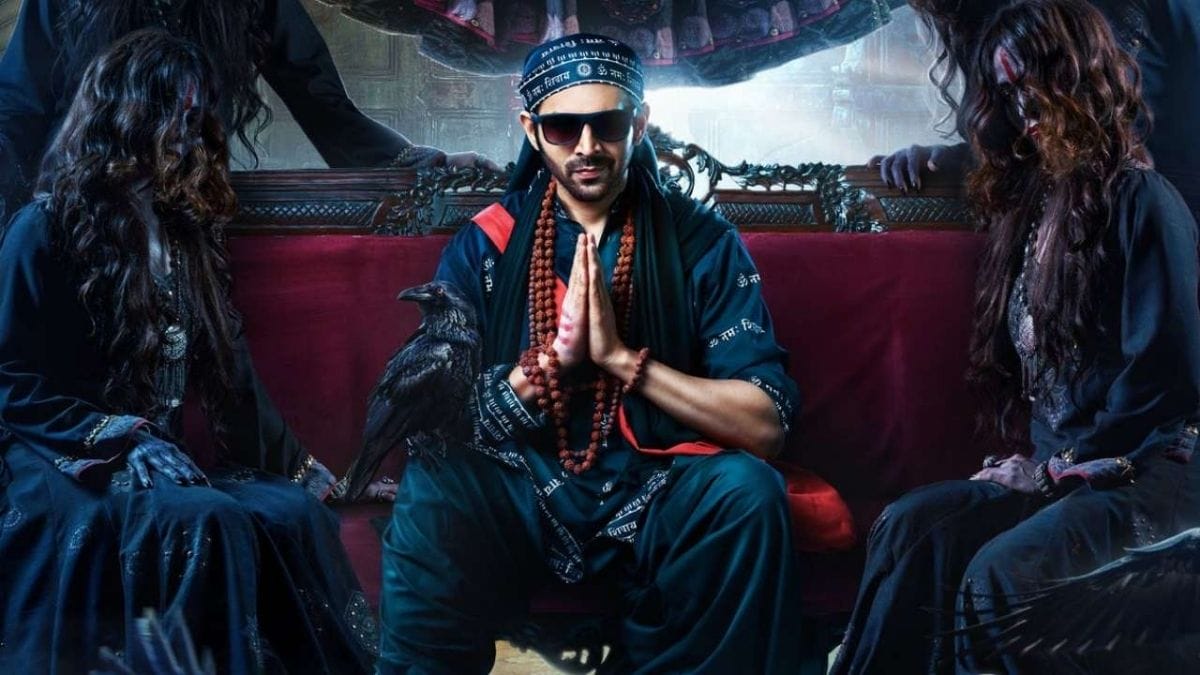 Bhool Bhulaiyaa 2 is a sequel to the Priyadarshan directorial Bhool Bhulaiyaa that had Akshay Kumar, Vidya Balan and Shiney Ahuja in the lead roles. Bhool Bhulaiyaa 2 stars Tabu, Kartik Aaryan, Kiara Advani in the lead roles. Kartik plays Ruhaan, a carefree lad who meets Kiara’s Reet by chance during a trip and falls in love almost instantly. Reet hails from a Thakur gharana in Rajasthan which has a sordid past. By a stroke of luck Ruhaan succeeds in persuading Ruhi to stay over with him for a party and not board the bus they had tickets for to take them home and guess what … The bus crashes leaving all the passengers in it dead. Reet and Ruhaan are ecstatic when they realise they have survived a potential catastrophe. That’s when Reet decides to take Ruhaan with him and thereafter starts the comedy of lies! To cover up one lie of Reet’s death, the couple has to keep lying to her family. Gradually, Ruhaan comes to know about a vengeful spirit that is kept behind closed doors Manjulika player by none other than Tabu. What happens thereafter will be revealed to you if you watch the film.

It seems director Anees Bazmee got a little too carried away with the cast, Kartik was given a freeway to act the way he wanted and the dialogue delivery looked forced and copied from the director himself or he directed him only on the dialogue delivery. Another point worth noting is that he gave a meaty role to Tabu because of what she has done in the film, no one else could have done it, thankfully Kiara was put on the back burner for the scenes Tabu did. That surely was a big plus.

Talking about the performances, Kartik Aaryan tries to be funny all throughout. The dialogues mouthed by him sound genuine though but sometimes the tinge of laughter in the midst of the comic scenes fail to hold much water. The worst part is, Kartik looked like the mirror image of director Anees Bazmee, it seemed as though he had directed him even how to deliver the dialogues or he perhaps copied him too much!

At times it becomes too much. In one scene when Manjulika’s spirit possesses Kartik’s Ruhaan, he bursts out into a classical dance and trust me, that is funnier than most of the film.

Kiara doesn’t have much screen time in the film, in fact for the most part she keeps hiding in the film in her own house!!

Tabu is the lady who takes the cake and leaves the crumbs for the rest. She is just too good as always. The laughter, the tears, the anger, the emotions, she is just too good. In fact 2 stars out of the 2.5 stars to the film belong to her.

The writing by Akash Kauahik and Farhad Samji could have been much better. Kartik’s character has neither been given any background nor any purpose. No one knows where he is coming from. The other characters in the film don’t have that issue though. All in all, merging the comic aspects in the film with the very scarce chilling moments isn’t good enough for a horror comedy. It had to be a little more exciting.

At the end of the day, it is a nice family entertainer and can be watched albeit the thinking caps are left outside the cinema hall.