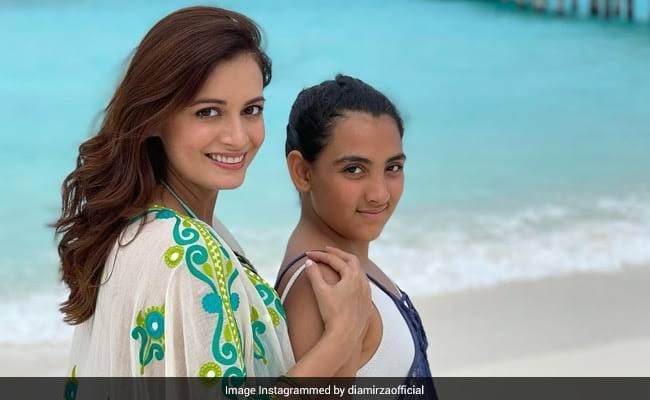 The gorgeous actress Dia Mirza took to her instagram handle to share cute moments with her step daughter Samaira to the song Iko Iko on Sunday.

The actress never fails to show the bond that both of them shares. Samira is Vaibhav Rekhi and Sunaina Rekhi’s daughter. Vaibhav parted with Sunaina in the year 2019 after being together for 11 years. Later, Dia Mirza and Vaibhav Rekhi tied the knot in February earlier this year.

Dia Mirza was seen dancing with Samaira and the two were seen grooving to “Iko Iko” by Justin Wellington wearing white tees with ripped blue jeans and white sneakers. The actress captioned the video as, “Sunday Shenanigans with My Bestie.”
https://www.instagram.com/reel/CReHHtuja_5/?utm_source=ig_web_copy_link

Many fans enjoyed “the besties” together having a gala time. Soni Razdan commented, “Haha cuuuuuties” while Bipasha Basu dropped a heart emoji.

Dia recently announced the birth of her son on May 14. She penned down a heartwarming message along with the post, “To paraphrase Elizabeth Stone, ‘To have a child is to decide forever to have your heart go walking around outside your body.’ These words perfectly exemplify Vaibhav & my feelings right now. Our heartbeat, our son Avyaan Azaad Rekhi was born on May 14th. Having arrived early, our little miracle has since then been cared for by tireless nurses and doctors in the Neonatal ICU,”

It feels good to see such bonding between them the mother and daughter. Dia was last seen in Anubhav Sinha’s critically acclaimed film “Thappad”