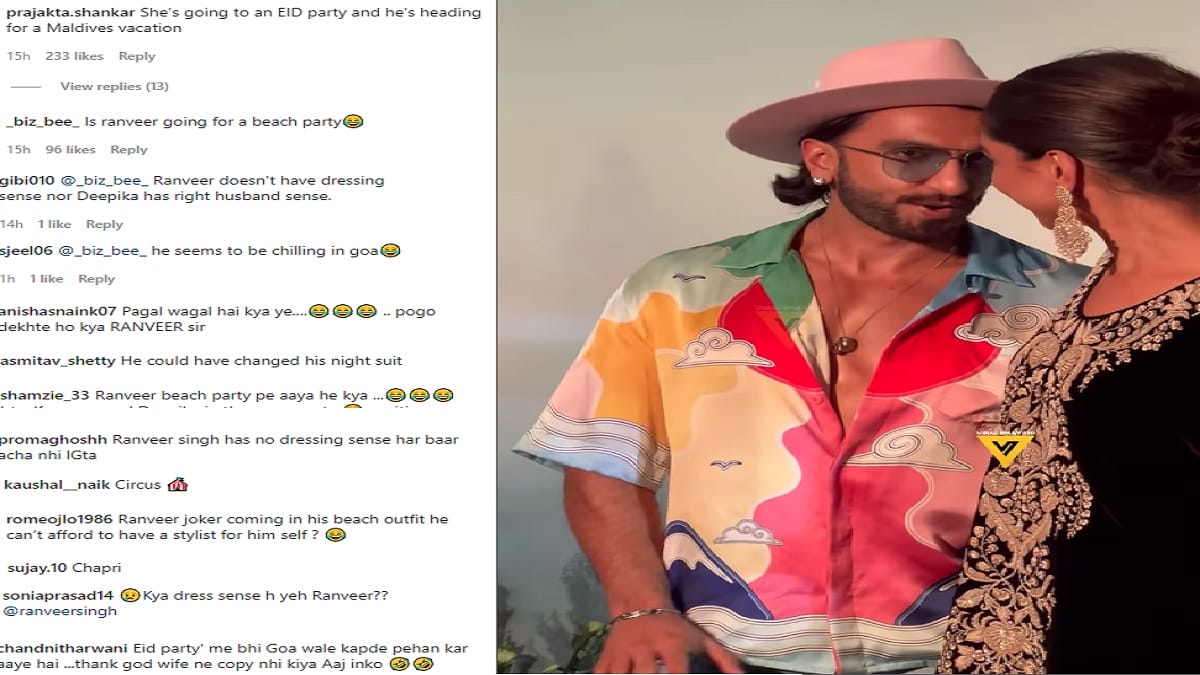 Salman Khan’s Rakhi sister Arpita Kahn hosted an Eid party on Tuesday 3rd May, 2022 and it saw the presence of the who’s who of Tinsel Town. From Ranveer Singh, Deepika Padukone to Karan Johar, from Kangana Ranaut to Nikhil Dwivedi and wife Gauri, from Karisma Kapoor to Manish Malhotra, Pulkit Samrat, Kriti Kharbanda. From Sushmita Sen and daughter Renee to Riteish Deshmukh and wife Genelia, from Siddharth Malhotra to Kiara Advani. You just name them.

everyone was dressed in traditional outfits, however, one actor that stood out as usual with his quirky sense of style was none other than Ranveer Singh. Ranveer was seen wearing a multicolored silk shirt that hung loosely on his torso and he paired it with light blue pants. He complimented his attire with zircon studs in his ears, a pair of azure transparent sunglass, and a light pink alpine hat! It didn’t seem as though he had come to attend an Eid party. On the other hand, his wife Deepika wore a black velvet embroidered salwar and she teamed it with black dhoti pants and black stilettos. She had tied her hair in a messy bun.

No sooner did the videos of the couple make it online than the trolls started bashing Ranveer for his sense of style. Some people even called him “mad”. Yes, that’s true. Some were even upfront in saying that “She’s going for an EID party and he’s heading for a Maldives vacation.” A user replied to the comment and wrote, “Ranveer doesn’t have dressing sense nor Deepika has right husband sense.” Another user commented, “Pagal wagal hai kya ye….😂😂😂 .. pogo dekhte ho kya RANVEER sir”. Another Instagram user wrote, “He could have changed his night suit”, another user wrote, “Ranveer beach party pe aaya he kya …😂😂😂” Another one wrote, “Ranveer singh has no dressing sense har baar acha nhi lGta”, Another user called him “joker”, he wrote, “Joker eid pe bhi isne apna jaloos nikalna hai😂😂😂”, another user stated that he can’t afford a stylist for himself, “Ranveer joker coming in his beach outfit he can’t afford to have a stylist for him self ? 😂” another suer wrote, “Eid party’ me bhi Goa wale kapde pehan kar aaye hai …thank god wife ne copy nhi kiya Aaj inko 🤣🤣”, another user mocked him saying, “Isne salwar kameez nahi pehna aaj 😂”.

Take a look at the comments:

For more such regular updates from filmdom keep a close tab on Indiachron.com