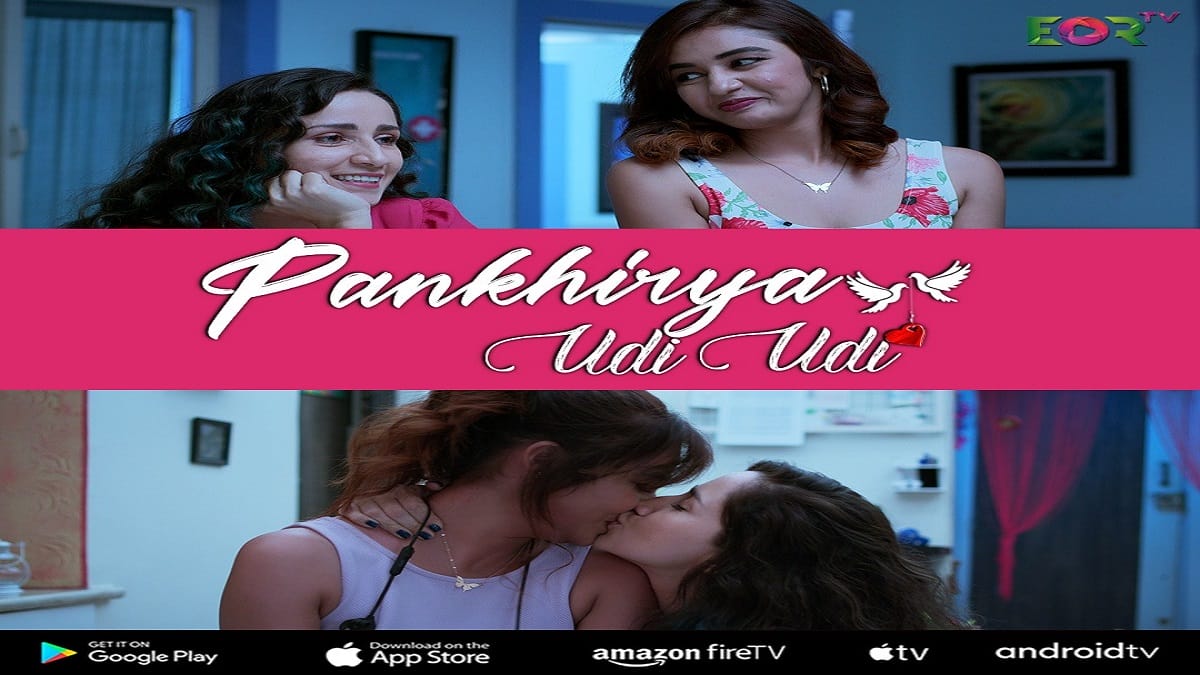 EORTV, India’s First LGBTQ focused platform released its fourth original titled Pankhriya Udi Udi, a rom-drama series on its platform. The series will have 8 episodes starring Kavita Banerjee and Snower Sania as leads opposite each other. The series aims to normalize same-sex relationships and adopts a raw visual approach to convey the true romantic love of two women. The series is Directed by Deepak Pandey and produced by Dreamzz Images Studio.
The story revolves around the journey of these two leading ladies and how they fight for what life throws at them. When the playful and jaunty Arya played by Snower Sania is discovered with a fatal disease, she wants her girlfriend Pankhi played by Kavita Banerjee to find a new partner.
Deepak Pandey, Director of the series said, “Ours is a platform which believes in equality and inclusion. Pankhirya Udi Udi is a beautiful story with our ethos at the heart of it. The story is all about highlighting five key aspects of life, hope, love, sacrifice, value of emotions and meaning of life. My vision is to inspire the audience with the series and to bring out the positive side of life instead of focusing on the dark. I’m very hopeful that my viewers will connect with the series and lead life towards happiness, support each other and usher in gender equality. Pankhirya stands out differently because it inspires viewers in finding that silver lining in the darkest of clouds”.

Speaking about the show, lead actor Snower Sania stated, “I deeply resonated with the power and message of the script. It is infused with so many facets of emotions; insecurities delivered with a refreshingly uplifting perspective. The narrative is constantly evolving; awakening; simmering our thought process all culminating into a final transformation. This has all been possible through the intriguing vision of Deepak sir who has tastefully planted so many hidden gems throughout the season with well-crafted plot twists & a hint of focused motive to keep “love and purity “as the essence & not the mundane “lesbian romance façade. The audience will experience a roller coaster of emotions; ups and downs; but also, a level of satisfaction in the way the story unfolds”.
Lead actor Kavita Banerjee added, “This is a poignant portrayal of a beautiful love story; and as a performer it has truly tested my imagination and challenged my skills. I found the treatment of the narrative very genuine that anybody and everybody in love or has ever been in love will relate to, the focus being on a ‘love story’ rather than a ‘lesbian love story’ – it is about time we move beyond cliches. The moment we speak of any story involving a same sex relationship, it ends up either objectifying the characters or an over-the-top charade sort of a portrayal. Thankfully, Deepak sir’s vision of the story is a much needed fresh take! “
EORTV is a premium video streaming app that offers thousands of hours of premium, exclusive and original content. Users can view Web series, Music videos, LGBTQ originals and short videos. The app focuses on making content which caters to the careworn community in the society.
EORTVGayGay filmLEsbianLesbian sexLGBTQLGBTQ moviesPankhirya Udi UdiQueer Cinema
Share
You might also like More from author
Entertainment