Priyanka Chopra Jonas’ mother Madhu Chopra cleared all the buzz about the actress’s marriage to Nick Jonas. As per News18.com, “It’s all rubbish, don’t spread rumours,” Madhu Chopra stated. However, the actress earlier dropped both her surnames – Chopra and Jonas – from her verified Instagram profile and such move by Priyanka left everyone shocked and confused as well.

Priyanka’s IG bio now has only her first name instead of Priyanka Chopra Jonas. However, Priyanka Chopra and Nick Jonas tied the knot in 2018 in India. Star Priyanka met singer Nick when she went to the US to act in Hollywood shows and films.

In an interview with fashion and lifestyle magazine Vogue, Priyanka stated that it was her engagement ring gifted by husband Nick Jonas that she cherished the most. The diva, who owns some of the most expensive clothes and accessories in her collection, was gifted the ring having costed reportedly around $2,00,000 by Nick in 2018.

Meanwhile, the lovebirds recently celebrated Diwali at their new luxurious Los Angeles home. The actress-producer also shared a series of photos featuring herself and Nick and captioned: “Our first diwali in our first home together. This one will always be special. Thank you everyone who worked so hard to make this evening so special. You’re my angels. To everyone who honoured our home and my culture by not only dressing the part but dancing the night away, you made me feel like I was back home. And to the best husband and partner @nickjonas. You are what dreams are made of. I love you. My heart is so grateful and full. Happy Diwali.” 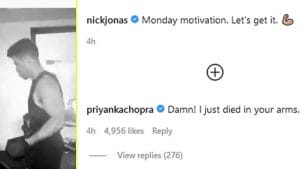