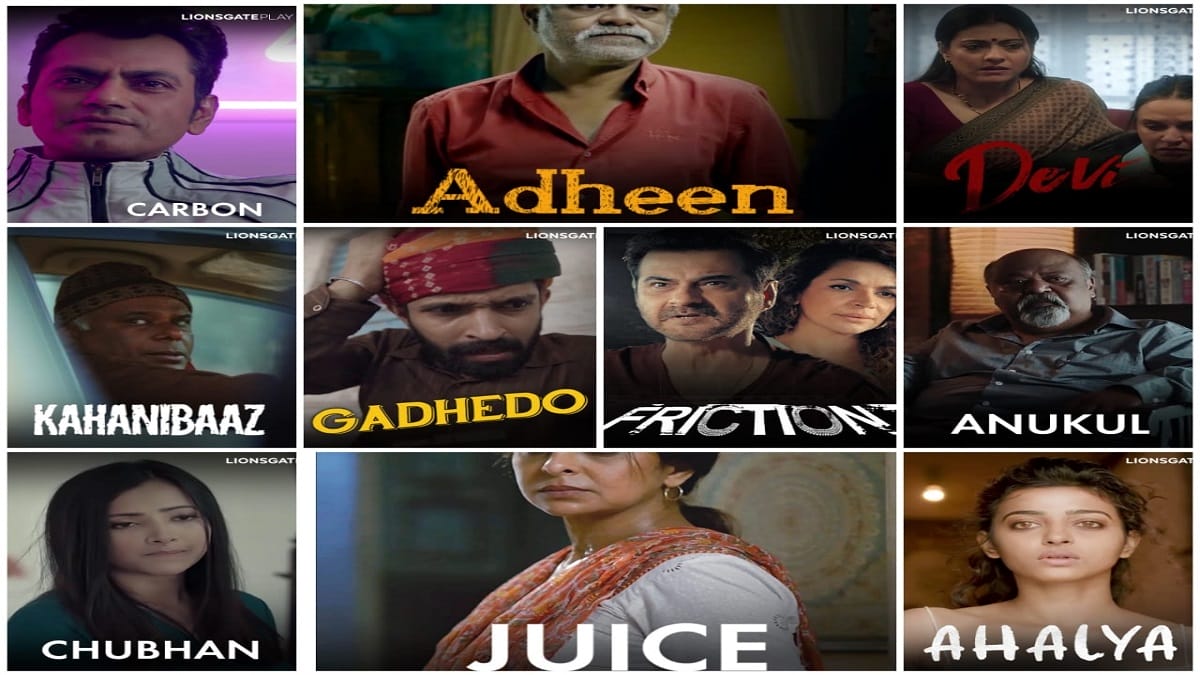 · Adheen – Selfish or selfless, what is the definition of love in a family? ‘Adheen’, a perfect short by Yash Verma starring Sanjay Mishra, Neeraj Purohit & Anupriya Goenka.

· Ahalya – A mythological epic retold in a modern fashion. An investigating officer has to decide whether he should bite the forbidden fruit or resist from seduction and deceit.

· AMMA MERI – A powerful story of a good son becoming a responsible father. A story of dilemma, pain, struggle, and sacrifice. Watch Amma Meri, a perfect short by Tarun Jain!

· Anukul – What happens when a machine starts questioning our ways of the world? A robot attendant is loved and hated in equal measure by humans. One day he decides to take a tough decision.

· Carbon: A Story of Tomorrow – A dystopian world where water is the most precious commodity is inhibited by humans who are driven by greed. A man with an artificial heart smuggles oxygen through the murky land.

· Chhuri – A lady decides to take matters in her own hands and confront the other woman in his husband’s life while the husband hides in her house.

· CHUBHAN – Sometimes you’re too scared to say what you are facing, even to the ones closest to you. Watch Chubhan, a perfect short by Sachin Arun Gokhale starring Shweta Basu Prasad & Manoj Kolhatkar.

· Chutney – To what extent will a woman go to save her marriage? In Chutney, she weaves a tale like no other that transforms her from a victim to something completely different.

· DURGA – Get ready to enter the extraordinary world of a young girl. Is it her dream or reality? Watch ‘Durga’, a unique tale by Abhishek Roy Sanyal

· EVERYTHING IS FINE – Everything is fine’ is a powerful short by #MansiNiraJain that will make you pause and ask your mother, “How are you?” and truly listen to her reply like you have never listened before. Watch this multi-award winning and deeply stirring short film

· Juice – Manju Singh and her husband are hosting a get-together of families on a really warm night.
Between the snacks, drinks and the laughs, something completely unexpected happens.

· Kahanibaaz – He starts off as a regular, simple taxi driver till things turn for the unexpected. Find out what happens next in Kahanibaaz, a perfect short starring Ashish Vidyarthi presented by YellowBulbs. Inspired by Gaana’s original Kahanibaaz podcast

· Kartaa – When your fate is sealed, what can you do to undo it?

· KATRAN – A story of an aged couple who even after spending years of togetherness is staring into an uncertain future. Watch this powerful short to find out whether they sail through this storm or give up on each other

· Let’s Play – “What happens when 4 strangers meet in an isolated lodge on a stormy night. Let’s play takes the viewer through a series of spine-chilling moments only to give them a shock in the end”

· Listener – In a world full of judgments, he had a knack for being open minded

· MUMBAI VARANASI EXPRESS – A man towards the end of his life decides to go to Varanasi and wait for his death. Just when he had given up all hope, a new lease of life changes the way he thinks.

· NAWAB – Nawab’, an original short by #MansiJain starring #AparshaktiKhurana, #GeetikaVidya & #MallikaDua portrays the solace a man finds in a dog when he least expected it. Streaming now!

· Nayantara’s Necklace – An accidental friendship between two of the unlikeliest characters and the twist and turns it takes as their relationship develops.

· Nitishastra – A sister has to choose between ethics and her family when her brother commits a crime.

· Ouch – What happens when a plan for extra maritial affair goes completely wrong? A man decides to leave his wife for a girl, but things take a turn when that girl starts having second thoughts.

· Rogan josh – A perfect dinner conversation leads to an uncomfortable truth. Rogan Josh stars Naseeruddin Shah, directed by Sanjeev Vig. It pulls you in and leaves you shocked.

· Sepia – Sepia is a tale of two opposites, their love, hardships and the test of time. Watch this perfect short by #ArchitKumar starring #AparshaktiKhurana and #SapnaPabbi

· SHUNYATA – Madhur works as a hitman for a gang in Mumbai. He lives a gloomy existence with regrets. He is friendly with a kid who lives on the street. Madhur sees this kid getting into crime and decides to intervene to give the kid a chance he never had.

· SIBLINGS – Family can be the biggest strength and also the biggest weakness at the same time. How far can one go to hold one’s family together Watch ‘Siblings’, a perfect short by Sheetal Menon starring Shivani Tanksale and Sheetal Menon!

· The Last Chapter – Nawab’, an original short by Mansi Jain starring Aparshakti Khurana, Geetika Vidya & Mallika Dua portrays the solace a man finds in a dog when he least expected it. Streaming now!

· THE LOVERS – Watch ‘The Lovers’, a perfect short produced by #VandanaMordani & #AnuraagMalhan starring #ShwetaBasuPrasad, #ZarinaWahab & #AnuraagMalhan that explores the intense emotions of love, hate and revenge in a relationship. S

· Friction – Based on a nuclear family, it is a short film wherein small squabbles between a modern-day couple snowball into a larger disagreement. The disagreement further led to a catastrophic end in the larger scheme of things

· THE SCHOOL BAG – A mother goes all out to fulfill an innocent wish of her child or a new school bag for his birthday.

· Visa – The age of shorts is truly upon us. So is the tragedy of the ones who are suffering. Visa is a short film that captures the struggles of a family who want to flee to a safer haven

· White Shirt – Two ex-lovers deal with life after their relationship.

· Vikalp – A small-town girl with many aspirations has moved to a metro city to fulfill her dreams. Now, what if she needs to choose between justice and her dreams?